Today was another beautifully sunny and hot day, it was so nice this morning (well, midday when we finally got up) that we went and had our morning cup of tea up on the roof! It was great.
We eventually made it outside, into the hot hot heat and went to explore an area in Brooklyn that we'd not really been to before, along Smith Street. It's really close to the Brooklyn Fare supermarket that we go to (which were going to today too), and it has lots of nice shops and places to eat and drink along the street.

I'd not realised until today that not long after I first arrived out here, I went along to the Bastille Day celebrations - there was a live swing band, some skate ramps and boulle pits out on the streets. Well, the Bastille Day celebrations happen on Smith Street! It's funny how I've only just realised where it all was, but it brought back memories of those first few months out here.

Whilst mooching around we found this interesting looking place... 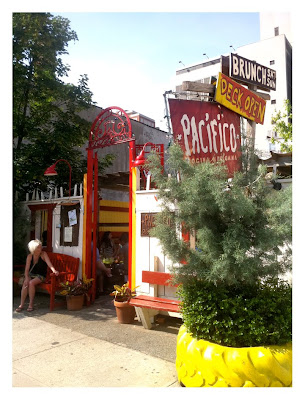 It was a Mexican beach shack in the middle of Brooklyn!
We had a quick look at the menu, it all sounded delicious, so we went in for some brunch.

Inside was just as shack-like. With colourful decking and mis-matching doors, there was a little taco bar at the back, where you could go if you just wanted a quick taco, or there were lots of tables in the sun for a sitdown meal. 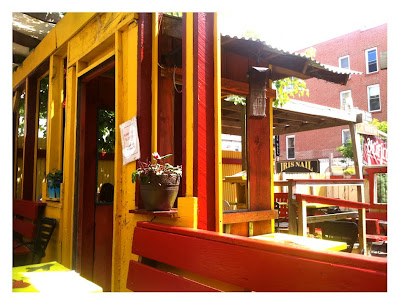 This isn't a great photo, but you get the idea of the beach-hutness. It felt like we were on holiday, it was great!

We had some DELICIOUS fried fish tacos and some mexican eggs benedict (with melon), and sat in the sun, enjoying some cold drinks and eves dropping on the fantastically awkward conversations around us.

It really did feel like we'd been teleported to another country, and we should have been stepping out of the door onto the beach, instead of onto the hot Brooklyn pavement.

It's a great little area around Smith Street and there are plenty more places to discover around there, so I think we might be heading back there soon.
Posted by Ollie at Sunday, May 29, 2011