For once the weather forecast was right - I walked out of the apartment block this morning to some rather light and pathetic snow... but now that I'm safe and sound and warm in the office it's coming down really heavily and the flakes are all big and chunky.

I think it's going to be very distracting today, I'm sitting looking out the window completely mesmerised by the snow whirling around between our building and next door. It's beautiful seeing it all settling on top of the water towers on the buildings around us, it doesn't look like it's settling down on the street level though.

I'm glad I wore my woolly hat this morning.
Posted by Ollie at Thursday, January 28, 2010 No comments:

Sweet Sounds in the Subway...

It was a bit of a horrible day today... 12 hours in the office and pouring with rain outside, all day long - but when I was walking through 14th Street Union Square station I heard the most incredible singing that completely made my day.

They're an acappella gospel group called Made Over and they were just amazing. I managed to find this video of them on the You Tube, but it's the same three men singing just as beautifully.

I think the buskers in the subway stations save the day sometimes. It really was a gloomy Monday until I heard them - I'm glad I had a few $1 bills to put in their collection.
Posted by Ollie at Monday, January 25, 2010 3 comments:

I'm back in Brooklyn... a little jetlagged (it's 7.30am and I've already been up for 3 hours!) and feeling far away from home again, but I'm glad I had my nice apartment to come back to, my little home away from home.

This is my 225 post and the first post of 2010... I wonder how many posts there'll be this year?! Hopefully I'll be doing lots of fun things and going to lots of new places that I can tell you about.

The flight back was OK, the plane was half full so I was able to have two seats to myself and fully recline my chair and spread out a bit. The beginning of the trip wasn't quite as relaxed though - the plane from Manchester to Dublin was delayed due to technical problems, in the end we arrive in Manchester at 10am, 30 minutes before my flight to New York was due to leave!

Despite having an escort in Dublin airport to help us make the connection a bit easier, it was still a mad dash and far from relaxing - we still had to queue for immigration and the security checks, the immigration officers were still horrible and intimidating and they still decided to give my hand luggage a 'random' search JUST before getting onto the plane (I've never had that before).

I ended up being the very last person on the plane, about 10 minutes after it was suppose to take off... I was dreading everyone clapping or something, or everyone moaning as I got on the plane - but I don't think they were...?

I spent most of the journey starring out of the window, looking down at all the frozen lakes and rivers in New Foundland, it was stunning - I love being able to see the sea from the plane window too, although it always confuses me because the sea looks like all the waves are standing still. I'm sure there's an explanation for that though.

We got to JFK nearly an hour early and thankfully all my luggage arrived with me this time. Finally as I was leaving the baggage claim hall, and trying to get my passport our of my pocket whilst holding all my bags and laptop, I put my blue immigration slip in between my lips to hold if for a second, only for the bloody officer (I say officer... he looked like a teenager) behind the desk tell me off! 'NEXT TIME DON'T PUT IT IN YOUR MOUTH!' I can sort of understand that it might be a little bit unhygienic, but they were rubber gloves for goodness sake! I made a point of not apologising and not saying thank you as he handed my passport back to me.

Oh, and one other thing about the immigrations people, I was walking behind their desks at JFK, so I could see their computer screens as they were processing people's passports. There was one passenger waiting patiently as the officer seemed to be tapping away at the computer putting details in, then I noticed what was actually on his computer screen... TETRIS!!!!! 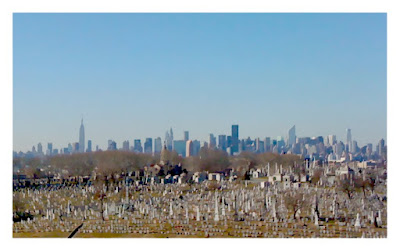 I thought I'd try and take a photo of this view, it always strikes me every time I'm in the taxi coming back from the airport. There are some points along the journey with a similar view that are a bit more striking, but it's tricky getting photos on the highway... The graveyards outside of Manhattan are vast and look like a model Manhattan full of mini skyscrapers. It's amazing to look over to Manhattan and think of the millions of people who live there and then see the graves of all the people who used to live there.
Posted by Ollie at Sunday, January 24, 2010 No comments: