Last night Abi and I went to a very VERY lovely place for tea called DBGB. It was the beginning of my birthday celebrations - albeit a wee bit early. But we went out for a special meal because we were planning on going to see Matt Costa perform last night, but after finding out he wouldn't be starting until 10.30pm, we changed our minds and we're going to see him perform tonight instead (we were already pooped by 7pm!)...
Anyway, we've been wanting to go to DBGB for AGES as it's always in the lists of top places to go and have a burger, the guy who runs the restaurant is a super fancy chef and has lots of restaurants all over America.

DBGB's split in two, the back half or the place is a very exclusive (you have to book way over a month in advance to get in apparently) restaurant, and the front section is a bar area which they call the café (as there are tables to eat at).

We knew you could just walk into the bar but usually you have to wait for a table to become free, but someone must have been smiling down on us because we walked straight in and were shown to a great table in the café. From then on though there was a constant stream of people coming through the doors - it was so popular.

We'd heard about the burgers being good, so obviously we had to order one - we decided to get one burger and one steak and share them... so as well as a delicious Steak Frites (with pepper sauce) we ordered the Piggie Burger... 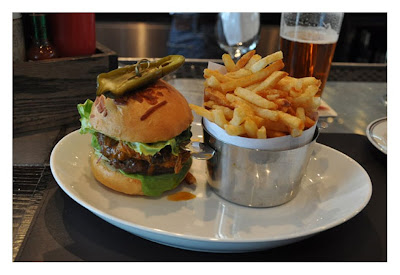 (This isn't my picture, I found it on Google, but it is the same burger)

The Piggie Burger is the most delicious burger topped with pulled pork and jalapenos in a cheese bun... it was absolutely dee-lish-us! It is by FAR the best burger in a sit-down restaurant that we've ever had, we almost wanted to say it was the best burger in New York - but we think we need to go back and give it a second try...

DBGB was a great place, a really friendly atmosphere and the staff were nice and friendly despite it being a very popular and well renowned place, and the food was amazing... best of all, it was stupidly expensive.

After our meal we strolled round the corner to the venue where Matt Costa was playing, just to have a look - and ended up seeing Matt Costa hanging outside! We're off to see him play in Brooklyn tonight so I'll tell you all about it tomorrow.

It was such a perfect evening.