We're all going on a summer HOLIDAY!

Abi and I have had the most fantastic week here - we had a brilliantly relaxing and fun Summer holiday, so prepare yourself for some serious bloggage because I've a fair few posts to make...

Starting with our trip to NEW JERSEY...

What trip would be complete without getting on the wrong train? Abi and I went to New Jersey to go to the Kings Of Leon gig at the IZOD Center, but our journey there was a little more eventful than we'd planned. We started off well, getting a nice box of Krispy Kreme donuts from Penn Station and getting on the Long Island Railroad to Secaucus Station NJ (we intially went to the wrong part of Penn Station, or the wrong station entirely, but we'll skim over that bit...), when we got to Secaucus we got on the train that we thought was going to Rutherford. The announcement said Rutherford, the times matched up... so we thought we were fine, but when the conductor came and checked out tickets he informed us that the train was NOT going to Rutherford...
So - we got off the train at the next stop, Woodbridge - a ONE TRACK station in the middle of what felt like no-where. We didn't feel tooooo bad because there was someone else on the train that made the same mistake, but that didn't really help the fact that we were a wee bit stranded.
Luckily we found a taxi number and we able to get a taxi to the place we were meant to be going - it turned out it was only a few miles away, but needless to say it wasn't the best start to the trip. At least we still had two donuts left - just incase we needed provisions. 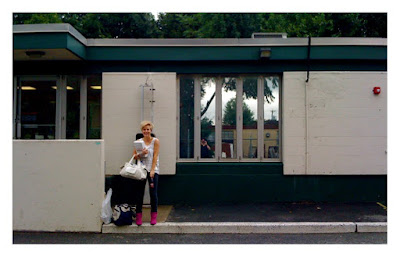 (Lost, but happy at Woodbridge Station - moments later there was an unfortunate incident with some Cherry Dr. Pepper and Abi's lovely white t-shirt wasn't quite so white anymore...) 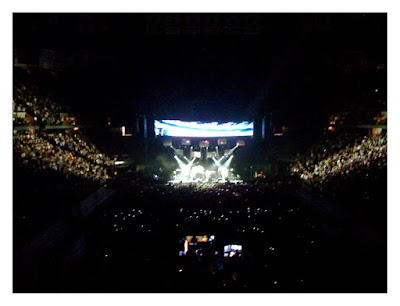 When we finally made it to the gig - The Kings Of Leon were AMAZING! As were the support act Glasvegas, it was so funny to hear Glaswegan accents, it made it even more special. The camera doesn't show it too well (it's form the iPhone) but we actually had really good seats... 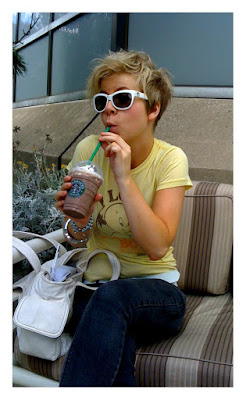 The next day we officially started out summer holiday - the sun was beaming! It was beautiful. We decided that as we were close by we'd pop to Walmart so Abi could experience the wonderment first hand and see where all our hard work had been going... then we went to Bonefish Restaurant and enjoyed some Bang Bang Shrimp for a late lunch (again, not the most perfect outing, we walked from Walmart to Bonefish, only to find that it wasn't open for another HOUR! Luckily they had some comfy seats outside - the shrimp was WELL worth the wait). I hadn't realised that there was Bonefish in New Jersey, it was/is one of my favourite restaurants in Arkansas and the Bang Bang Shrimp is DELICIOUS!