A while ago Abi worked on a Sunday for a big pitch in Leeds - a group of people ended up working an 11 hour day on that Sunday, so to say thanks Elmwood gave them all meal vouchers so they could go out for a fancy meal. So, this afternoon we decided to finally use that money and Abi and went on a veeeeery special lunch date at the River Café! 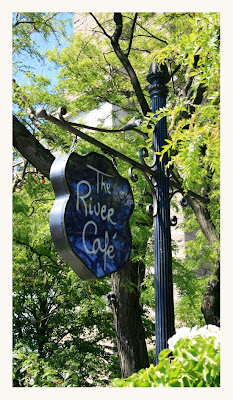 The River Café is in Brooklyn Heights and is right under the Brooklyn Bridge. It feels just like being in a restaurant in Jersey, it's a small place that has a cobbled drive way leading up to it which is lined with thick and colourful plants and flowers and there's a beautiful little secluded garden at the front. 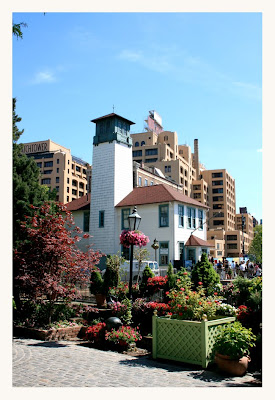 It's a super fancy place, the dining room bit is on a in on a flotilla so it feels a bit like you're walking onto a boat, looking throught the port-hole windows out onto the river. When you walking into the dining room you're greeted by the most incredible view...

You can see all the skyscrapers and the Brooklyn Bridge, you can see all the water tour boats sailing up the river, and the little speed boats and jetskis whizzing by. I think we had one of the best tables in the whole restaurant, it was along the back wall, so we looked directly out of the windows (this photo was taken from our table). We thought it was lovely that they seat both people at the table on the same side, so we could both enjoy the view.

I know I've posted a lot about food recently - but the food was absolutely DELICIOUS! Abi had Scallops served in the shell on a big bed of ice in a silver bowl to start and I had the Octopus salad, then Abi had the duck which was a crispy breast and a confit leg thingy that looked like a scotch egg, but it was duck confit surrounded by mashed potatoe and fried. I had the steak which came with home made chips, mushroom marmalade and a blue cheese fondue (it was more a sauce but fondue sounds fancier)... it was all so tasty! 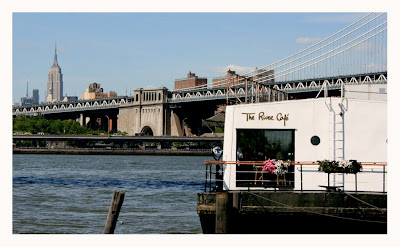 I don't think we'll ever be able to afford to go there for tea, but I'm sure it looks stunning at night time, seeing the skyline being all lit up. It was an incredible special lunch date that we'll never forget - neither of us could quite believe how amazing it was, and we still can't quite believe that we're living in New York - it's very surreal but absolutely incredible at the same time.
Posted by Ollie at Saturday, May 15, 2010